While the stalks of rhubarb plants are commonly used for food in various parts of the world, the roots of the turkey rhubarb (rheum palmatum) plant have been one of the most widely used herbs in Chinese traditional and alternative/complementary medicine for centuries. It is used for a variety of health conditions, including:

How does it work?

The ability of turkey rhubarb root to help alleviate the symptoms of these conditions is derived from the various biochemical compounds that can be extracted from the plant. These molecules include anthraquinones, tannins, calcium oxalate, and fatty acids, among others.

The anthraquinones and tannins have antioxidant and anti-inflammatory effects, while the anthraquinones, in particular, are vital to rhubarb’s role in adjunctive cancer treatment, as discussed later. Regarding use for gastrointestinal upset, rhubarb can be used to treat either diarrhea or constipation, due to its differential dose-dependent effects. At very low doses, the tannins in rhubarb cause constipation, which is helpful for those with diarrhea; on the other side, the metabolites of certain anthraquinones cause gastrointestinal motility and thus diarrhea, which explains rhubarb root’s usefulness for constipated individuals.

Interestingly, relief of menopausal symptoms is the most research-supported use of rhubarb root. A randomized, double-blinded, placebo-controlled clinical trial published in 2006 followed 109 perimenopausal women for 12 weeks after beginning a regimen of rhubarb; results showed significant decreases in menopausal symptoms, especially the frequency and severity of hot flashes. 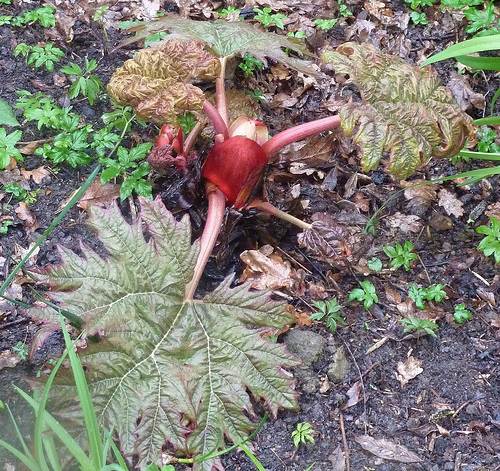 Several of the molecules available from rhubarb root have potential effects on cancer cells. These effects have been observed on cells in the laboratory and in mice, but not in humans with active disease. As stated, the general anti-inflammatory and antioxidant effects of anthraquinones and tannins have cancer-fighting roles. In addition, though, anthraquinones have specific tumor cell killing capabilities. The most highly concentrated anthraquinone in rhubarb root, emodin, prevents cell-cycle progression and induces cell death in cancer cells, with preference for cancer cells over healthy cells. Emodin has also been said to prevent cancer metastasis or spreading of cancer to different organs. Another anthraquinone in rhubarb root, rhein, inhibits glucose uptake in cancer cells and alters cancer cells’ cell membranes to induce death. Anthraquinones also can reduce radiation-induced lung damage while improving lung function in patients with lung cancer.

And while rhubarb has reported cancer-fighting abilities as an individual herb, it is also a component of the popular alternative cancer treatment Essiac tea, along with sheep sorrel, burdock root, and slippery elm bark.

In general, rhubarb root is considered safe in moderate doses. Side effects of rhubarb root include abdominal discomfort, nausea/vomiting, diarrhea, severe allergic reaction, and kidney and liver damage. If diarrhea is severe, dangerously low levels of potassium can occur.

Rhubarb root can also interact with different medications prescribed by a physician. Digoxin, a drug used for heart failure, can lower levels of potassium. Since rhubarb can also lead to low potassium via its laxative effect, one must exercise particular caution when using rhubarb in conjunction with digoxin. Also, rhubarb increases the activity of certain liver enzymes that are involved in the metabolism of a variety of medications, including some antibiotics, cholesterol-lowering medications, antihistamines, and some drugs used for cancer and transplant patients.

As rhubarb root contains high levels of oxalic acid, those with history of kidney stones should refrain from using this herb. Alternatively, though, one can purchase commercial rhubarb products that have been processed to remove oxalic acid. There is also no maximum safe dose that can be recommended for pregnant or breastfeeding women, children, or people with significant liver or kidney disease. Pregnant women should especially avoid rhubarb supplementation because it can cause uterine contractions. In addition, rhubarb has some estrogen-like activity and should be used with caution in people with estrogen-responsive cancers, such as breast cancer.

Turkish Rhubarb root is one of the most commonly used herbal supplements and has been used for a variety of medical conditions since ancient times. But though it is regarded as generally safe, it remains important to educate oneself about the potential side effects and contraindications to using rhubarb root, as with all nutritional supplements.