Watercress has the ability to fight cancer, improve eye health, and prevent loss of function in the brain cells. It is an herb that is harvested from a water-based plant, where the roots are underwater but the leaves are above water. It has high levels of antioxidants and vitamins, and is great both as a supplement and as a food. It’s like spinach or kale, and can be cooked into many things, as well as put in salads and green smoothies. Watercress is also commonly found in 8-herb essiac tea formulations. 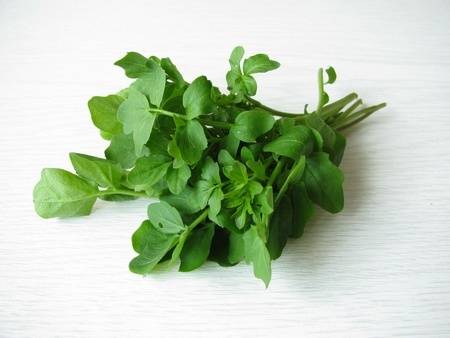 Watercress is considered a super-food by many due to its wide range of capabilities. A large component of watercress’ great health benefits is its ability to fight off free radicals. Free radicals lead to cancer and neurodegenerative disorders, like Alzheimer’s, Parkinson’s, and dementia. In various studies, the plant has been shown to be great at boosting overall immunity. It can even slow down the progression of neurodegeneration when it has already begun to occur. For those with already poor vision, or those who are at risk for common eye diseases like cataracts, watercress can help strengthen your eyes and prevent these conditions from developing.

The plant has its greatest effects when consumed regularly, usually every day. The recommended serving size for its health benefits is not clear, but is around ¼ cup to ½ cup. Throwing a few pieces of it into a salad, casserole, or other meal every day should produce beneficial results. If you are a smoker who is concerned about the effects of the thousands of toxins in the smoke, you’re in luck! Watercress will give your cells a greater ability to shield themselves from the harmful effects of the toxins. It will also help to fight off the exaggerated effects of oxidation and free radical formation that occur with smokers. Watercress is a fabulous tool for people who are frequently exposed to airborne pollutants and would like to reduce the harmful effects. Make sure to always ask a doctor before beginning to take any new supplements if you have any major health problems or are taking any prescription medications. Watercress has been shown to reduce the effectiveness of certain drugs, and may produce harmful effects in the body.

Many of the accomplishments of watercress are due to its immunity boosting properties. This includes its high concentration of antioxidants and vitamins. Watercress boosts the defenses of the immune cells, allowing them to target cancer cells and kill them more quickly, before they develop into malignant tumors. Everyone has cancer cells in their bodies sometimes, due to random mutations as well as toxins from the environment. Free radicals play a large part in the development of cancer cells. Free radicals are a natural byproduct of our necessity for oxygen, and seem to be unavoidable. Luckily, herbs like watercress enable our bodies to fight off cancer and other diseases more efficiently. Antioxidants are absolutely vital to everyone’s health, because we are often unable to control the amount of toxins, pollutants, and free radicals that enter our bodies.

Watercress is great for adults that are not pregnant, but pregnant women and small children should not ingest it in large amounts, such as supplements. This is because the plant has been shown to induce menstruation, and could cause a spontaneous abortion of pregnancy. It is not fully know if this food is harmful to small children, because mixed results have been shown. In general, a casual amount is healthy, but large quantities should not be consumed. This applies to any herb or medication, as our bodies can only process a certain amount of the vitamins and other molecules in these substances. Watercress should not be taken with certain drugs for this reason. If the watercress and medication both contain large amounts of a certain vitamin, that vitamin may end up causing harm in our bodies due to the high concentration.

Watercress is a great super-food used for a many purposes. From basic nutrition to preventing cancer, this plant is a fantastic choice that should be part of everyone’s daily diet. The plant is fine in moderation, such as in foods every few days, and will have long-term benefits to those who consume it. The herb is able to slow down the progression of loss of function in the brains cells, which is associated with dementia. It is likely that this also functions in prevention. If you have a family history of neurodegenerative disorders, it may be a good idea to consume watercress regularly. This is also true for those with poor vision, or with a family history of cataracts and macular degeneration.

While there are many factors in our lives that we cannot control, diet is often one of the few things that we can. We all have genetic factors that partially determine our likelihood to develop certain diseases, but by eating a healthy diet, we do the best we can to try to prevent these diseases. Watercress is a great green vegetable like spinach, and can be used in many foods. If you don’t particularly like the taste of vegetables, try making a smoothie with watercress, spinach, and a few of your favorite fruits. You’ll mostly taste the fruit, but will still receive the amazing effects of the vegetables. When you eat healthy, you’re more likely to continue to eat healthy, and vegetables like watercress are a great place to start. As we’ve all heard before, prevention is the best cure!

Sign up to receive the latest deals on Essiac tea and other goodies.