There are sources suggesting that the original recipe for Essiac Tea given to Rene Caisse consisted of eight herbs. Others state that the original recipe was four plants and the creation of the eight ingredient recipe was a joint effort with a company afterwards to enhance the mixture and make it more palatable. Another report is that the eight ingredient formula was purchased from a colleague of Miss Caisse’s after her death. Whichever is valid is not as important as the confidence deserving any recipe to which Miss Caisse had influence. Her experience, knowledge and passion of the treatment had no equal.

Whatever the original recipe was is now irrelevant. We know Miss Caisse labored many years in testing, improving and refining the original recipe. She performed her devotion to Essiac open to the professional scrutiny of her times and was consistently praised and her work supported.

In the core recipe the following four ingredients are essential.

An eight herb formula is still currently marketed. What do the additional four ingredients add to the mixture?

Understanding the phytonutrient contributions to the mixture from the additional four plants will help to understand potential added benefits.

Seaweed has long been used in traditional medicine. It is commonly used for the iodine content in hypothyroidism (low thyroid). It is a therapy for high blood pressure and for weight loss. It is also used to treat arthritis. A lower breast cancer rate is associated with kelp supplements.

Kelp is an excellent source of minerals including the more little known trace minerals essential to certain biologic reactions. The list includes iridium, germanium and rubidium in addition to the more common minerals.

Bioavailable calcium is available in kelp. Calcium obtained through kelp seems to be absorbed better than from some other sources.

This supplement is vitamin rich with many bionutrients. Vitamins include:

Essential fiber content is significant and there is a lot of protein provided as well. 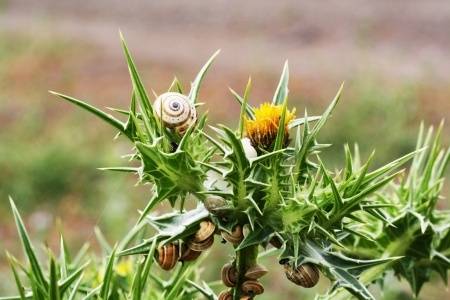 The major common use of blessed thistle is as a galactagogue to promote breast milk. Additional effects noted are to increase urinary frequency, treat loss of appetite or indigestion, cold symptoms including cough and diarrhea. It works well on the skin for acne and other inflammatory skin conditions like eczema, psoriasis and superficial bacterial infections like boils. It has also been used to treat headaches.

This plant has a bitters like quality that stimulates bile. This property increases appetite, assists digestion and keep the gall bladder functioning strongly. It is thought that the increased bile production and excretion acts to clear liver toxins and promote liver health.

Red clover has been found to provide a wide range of health benefits. Some of the conditions it is used for in traditional medicine include:

Red clover contains a lot of phytosterols and phytoestrogens as well as other phytonutrients with other effects. The phytoestrogens have been used as a treatment for menopausal syndromes. The estrogen like compounds ingested from the plant act like natural hormone replacement therapy (HRT). In one study the phytoestrogen in red clover supplements decreased hot flashes by a “modest” amount.

Other reproductive uses of red clover are to restore irregular menstrual periods and to adjust the vaginal pH to encourage conception. The phytoestrogens are particularly strong in this plant. It should be no surprise red clover is a dietary staple of most rabbits.

This semiaquatic plant contains high levels of vitamins and minerals. In addition it provides a wide range of beneficial phytonutrients. Watercress has been used for:

One action identified from watercress is that it inhibits angiogenesis (blood vessel formation) to cancer cells. This deprives them of critical growth and maintenance energy causing cellular death. Ancient texts recommend using watercress and vinegar as a treatment for bleeding.

In history watercress can be traced back to the ancient Greeks, Persians and Romans. Watercress was recommended to children to encourage strong growth. It was also provided to the armies of Greece and Persia for strength fortifying qualities. The benefits of watercress have been known as early as 400 BC when Hippocrates grew it to use in the treatment of blood disorders.

While there may be some additional enhancing phytonutrients in the eight ingredients blend, one truth is that there are four more items to which to be potentially allergic. Each additional plant adds a new plant family that may stimulate an allergic reaction in some people.
In addition to allergies, the chance for side effects is concurrently increased with larger numbers of ingredients. Diabetics may need even closer blood sugar monitoring with additional phytochemicals working. The new phytosterols in the mixture may affect glucose levels.

Now an absolute warning to anyone pregnant or planning to become pregnant should not use the 8 herb mixture especially. The effects of red clover on the female reproductive system may jeopardize conception and pregnancy viability.

Watercress interferes with the cytochrome P450 drug metabolism enzyme system and may interfere with certain prescription drug use. If taking prescribed medications always check with a health care professional before starting any supplements.

In the end only an individual can determine if the additional risks in the eight item formula balance the potential additional benefits. A prevailing attitude in modern society is that more is better. If one works, two will work better. In the case of the four ingredient versus the eight plant mixture the increased risks may outweigh any additional benefits.