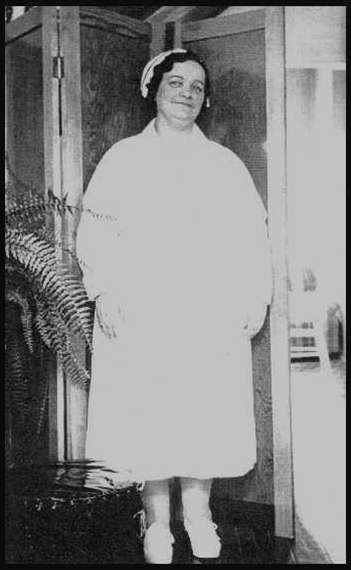 Rene Caisse at her clinic in Bracebridge, Ontario

Rene Caisse was a Canadian nurse who used essiac to treat thousands of people throughout her life. She first learned about the tea in 1922 during a conversation with a patient, an older English woman. Rene noticed a scar on her breast. The woman told Rene about her trip from England to northern Ontario, and how she had developed swelling and pain in her breast during that time. An old native medicine man had told her that she had cancer, and that he could heal her.

Skeptical of his claims, however, she decided to seek medical attention and, after traveling to southern Ontario, the old English woman was diagnosed with advanced cancer. The doctors suggested that her breast be removed completely. At that time this woman and her husband were very poor, and when given the choice of losing a breast or trying the medicine man’s remedy, she saw no reason why she wouldn’t at least try it. Upon reaching the mining camp, the English woman sought out the consultation of the medicine man and began taking the medicine as a treatment for her cancer.

Rene, entranced by the story, wrote down the names of the plants and herbs used in the medicine, and kept them for herself to help if she ever developed cancer in future. As it happened, her aunt was diagnosed with cancer in the town of Brockville, Ontario. After reaching her and speaking with the doctor, who she had known previously because of patients she had nursed in the past, she requested that they try the old medicine man’s tea to see if it would help. Given that the doctor had no other medical knowledge to apply to the cancer, he consented, in the hopes of helping the woman. After taking the tea regularly, Rene’s aunt lived for 21 years after her run in with cancer, and was never diagnosed with any recurring cancer again.

Upon seeing this seemingly “miracle” cure, other doctors began to request her help, and she traveled to many different patients. The results were amazing. In fact, the results were so staggering that eight of the doctors she worked under administering the treatment sent a letter to the Department of National Health and Welfare.

The letter stated as follows:

“To Whom It May Concern:


We the undersigned believe that the ‘Treatment for Cancer’ given by Nurse R.M. Caisse can do no harm and that it relieves pain, will reduce the enlargement and will prolong life in hopeless cases. To the best of our knowledge, she has not been given a case to treat until everything in medical and surgical science has been tried without effect and even then she was able to show remarkable beneficial results on those cases at that late stage.

“We would be interested to see her given an opportunity to prove her work in a large way. To the best of our knowledge she has treated all cases free of any charge and has been carrying on this work over the period of the past two years.”

Unfortunately, this request was not met with open arms, and resulted in two doctors being sent to investigate her. Ultimately, because she was administering the treatment at the request of some of the best doctors in Toronto, she was not arrested and was allowed to carry on with her business. Her treatment even caught the interest of Dr. W.C. Arnold, who was one the investigating doctors.

After seeing the treatment Dr. W.C. Arnold requested that she come to work at the Christie Street Hospital Laboratories in Toronto, where she tested the treatment on mice. During this time she gradually began to eliminate certain ingredients from the treatment and tested its effectiveness via an injection instead of ingestion. After many trials and diligent investigation, she came to conclusion that an injection of sheep sorrel solution, supported by oral tea ingestion would eliminate cancer much faster than just with the oral treatment. Her investigation and treatment testing spanned from 1928 to 1930.

Eventually, she became so involved with her research that she gave up nursing all together and focused all her time on research and the treatment of patients. Doctors all over Canada were sending her patients to have the treatment administered, and popularity began to grow. After some time, Rene felt that the evidence backing her discovery was sufficient enough to appeal to Dr. Frederick Banting, the man who discovered insulin. After travelling to the Banting Institute to show him the x-rays supporting the effect of her treatment, Dr.Banting suggested she take her treatment to the University of Toronto for further research.

After much consideration, Rene decided that she could not trust the University to allow her to be involved in the research if she was to give them her formula, and she decided to turn down his suggestion. Because she knew there was no fear of negative side effects, Rene wanted to prove the treatments worth with practical use, instead of laboratory research. She knew her treatment worked, but she knew she was in no professional position to be recognized for such a discovery.

However money was running thin, and without her nursing job, living in the city seemed less and less feasible. Because she didn’t charge for her treatment, and depended entirely on volunteers to gather her resources, her income was scarce and she had little time for a new job after treating over 30 patients every day. It was at this time that she decided she would move to the smaller town of Timmins where she would work under Dr. J.A. McInnis treating his cancer patients.

After some time there, Rene decided to move to Peterborough where she was threatened with arrest from the College of Physicians and Surgeons. Rene asked for a hearing from the Hon. Dr. J.A.Faulkner , who was the Minister of Health at the time. Her request was granted and she arrived at the hearing with 5 of the doctors she had previously worked for, as well as a number of patients that she had treated using what was now called Essiac tea.

After presenting her case to Dr. J.A.Faulkner and some of his select staff, he deemed it acceptable for her to treat her patients as long as they provided written diagnoses from their doctors and she did not charge for the treatment. Rene accepted the terms and graciously went back to Peterborough to continue assisting her patients.

It was not long after she had arrived back in Peterborough that she was contacted by Dr.Alfred Bastedo in Bracebridge about a patient he had sent to her with cancer in his bowels. He had also gone out of his way to contact the Town Council of Bracebridge and ask that a hotel in town be made into a cancer clinic on the condition that she move back and practice her treatment there. It was there that she treated patients with varying stages of cancer from all over Canada from 1934 to 1942. Some, if not most, of her patients had come to her only after being given up on by modern medical science.

Not long after the opening of her clinic in Bracebridge, Rene’s mother became ill and was diagnosed with gallstones. Because she of her age, her heart was too weak to operate and they feared she may not have long to live. Rene, not confident in the diagnosis, contacted Dr. Roscoe Graham, a very famous doctor at the time, to examine her mother to confirm her diagnosis. After his examination, Rene was told that her mother had cancer, and had only days to live. After administering the treatment and slowly lessening her dosages, Rene’s mother was completely cured of her cancer, and lived for another 18 years before passing away (due to a heart condition).

Rene now found that interest in her treatment had spread to the U.S. and some doctors had contacted Dr. John Wolfer, of the Alumni Association of Northwestern University Chicago, suggesting that he ask Rene to treat some of his patients. After meeting with Dr. Wolfer and reviewing the histories of some of his patients she accepted his offer, despite the fact that most of the cases were, by medical standards, hopeless.

Rene saw this as an opportunity to prove her treatment could work, and to show her results in even more patients while inspiring more interest in her treatment. After working in Chicago every Thursday for quite some time, she had brought interest to her treatment by many doctors who had originally been very skeptical. In fact, she had received 2 separate offers to move to the United States and work in clinics there. However, Rene wanted to ensure that Canada received the credit for the discovery.

In the following years Rene Caisse appealed a petition to the Minister of Health in the hopes of legalizing Essiac tea, so patients could be helped all over Canada. However, despite her efforts and the growing number of patients who came forth to support her claims she was consistently denied her request. Her final petition, in 1938, despite the 380 patients who had come forward and the support of many doctors, was not passed.

Of the 380 patients who were present at the hearing, only 49 had been allowed to speak, and the commission only recorded that 49 patients had even showed up to the hearing. They also threw out all x-rays that had been used to diagnosed the patients and deemed them unacceptable for diagnosis. They claimed that all of the diagnoses were mistaken or wrong, even though most of the patients had been diagnosed by multiple doctors. In fact, even after it was not passed, hundreds of people wrote letters of outrage to the ministers regarding their verdict.

Rene’s efforts to contribute her cancer treatment was met every step of the way with resistance from high ranking officials within the government and medical associations. Despite the fact that Rene had never charged for her treatments and only asked that she be an active part in their research process, she was threatened with arrest more times than she could count, and scammed out of legalizing what could have been one of Canada’s biggest contributions to medical science.